The recent storms moving through here hampered our efforts at starting our 2011 queen-rearing program. However, I was able to make my selection of a Russian Breeder Queen in the last few days. She is a daughter of a Russian Breeder originally obtained from Glenn Apiaries of Fallbrook, CA several years ago.  When the original queen was superseded, the colony remained in our breeding yard and produced honey for us and supplied drones for our newly hatched  2009-2010 virgin queens.

The current queen is marked green for 2009. The colony has survived without any treatment for varroa mites, shows no visible signs of varroa mites and is gentle to work with. The queen is an attractive dark color and her brood pattern is solid and healthy. The Hygienic test I performed on her brood showed 90% hygienic behavior in the last 24 hours. 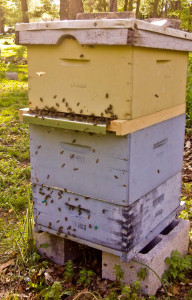 Yesterday we set up a good colony as our 1st 2011 cell builder, which will be used as part of the cloak board method. On Sunday, May 1, we will be attending the Hoboken Arts and Music Festival as vendors, offering our Honey and beeswax products to the 60,000 plus visitors who will be attending the event.

On Monday we will graft our first set of queen cells of the season from our newly selected Russian Breeder Queen.  (I am reluctant to predict the results of our first grafting this year, as I may need to “practice” to regain my eventual good form – it has been 9 months since I lasted grafted)