The Church group completed their tour of our operation and breeding yard yesterday. About 17 adults and children took the tour and they had a great time. The weather was perfect and Mary as always did a great job telling the honeybee story. 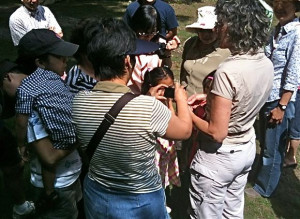 Mary and I are currently working with a mentor from SCORE on revising our Marketing and Business plans so I thought I would share with you some of our thoughts from February, 2006.

Our way of looking at and working with bees changed dramatically four years ago when about 40 of our 80 beehives collapsed a month after we had harvested 4,000 lbs. of early season honey; Mary and I were in a state of shock! We spoke to all our Beekeeper friends and about the best they could tell us was the mites (V. jacobsoni), that we had been treating for, had become immune to the treatments. The conventional thinking had been to treat the mites with chemicals and when the chemicals didn’t work anymore then we should switch to the newest chemical which the mites still had not yet become immune to. Mary and I had worried a lot about treating our bees with chemical medications and this disaster was the last straw- the straw that broke our camel’s back

We immediately began to look around to see what other beekeepers were doing to fight the mites that didn’t involve chemicals! Soon we discovered a Honey Bee project that was being run at the USDA , ARS Honey Bee Breeding, Genetic, Physiology Research Laboratory in Baton Rouge, Louisiana that was actually working with Russian Queen Honey Bees imported from Russia. The purpose of the project was to determine if the Russian version of the Honey Bee species (Apis mellifera) would be more resistant to the mite since:

Apis mellifera is not native to the Primorsky Territory on Russia’s Pacific coast, but was first moved there in the last century. At that time, pioneers from western Russia took advantage of the completion of the Trans-Siberian Railway and moved bees from European western Russia to the Primorsky Territory in Asian far-eastern Russia. This far-eastern area of Russia is within the natural range of Apis cerana, the original host of Varroa jacobsoni. Thus A. mellifera was brought into the likely range of V. jacobsoni even before the parasite was scientifically described in 1904. This probable long association of V. jacobsoni and A. mellifera in the region has engendered one of the best opportunities in the world for A. mellifera to develop genetic resistance to V. jacobsoni…. Source: USDA Agriculture Research Service

When Mary and I discovered the American Honey Producers Association was meeting in Baton Rouge, Louisiana for their 34th Annual Convention (January, 2003) and that they were going to highlight the Russian Honey Bee and also take a field trip to the USDA , ARS Honey Bee lab we made travel arrangements and booked our flight.!

The following Spring we began a program of moving our HoneyBee stock over to Russian Honey Bees. Our first task was taking a trip to Virginia to pick up Russian baby bee hives (also knows as Nuc’s ) from a beekeeper name Bob Brockman who was recommended by the people from the Baton Rouge bee lab. Bob had been using Russian bees for a number of years and he over wintered his bees from upstate New York in Virginia. Later in the Spring we received in the mail Russian Queens from Bob Brockman and Hubert Tubbs at Tubbs Apiaries in Mize, Mississippi and introduced these queens into our bee yards.

In 2004 we continued our introduction of Russian Queens from Bob Brockman and also Ray Ravis from North Carolina. In addition Ed flew out to Ohio to take a Queen rearing course at Ohio State University with Sue Cobey.

In 2006 we will be introducing Russian Queens from Bob Brockman and Ray Ravis. In addition we will be bringing in a Russian Breeder queen from Glenn’s Apiaries and intend to produce (100) Russian Queens. See Glenn Apiaries

Finally we are on a waiting list for Russian Honey Bee Winter Nuc’s from Kirk Webster at Champlain Valley Bees & Queens in Middlebury, Vermont; hopefully we will be making the trip to Middlebury, Vermont. We think Kirk’s bees will be a real positive influence for our Honey Bees.

Since we began migrating our Honey Bee yards to Russian Honey Bees in 2003 we have not used the following chemical medications: Apistan, CheckMite and Terramyicin.

Our Honey Bees have been getting stronger since 2003 and we hope this year’s activities will only make our bees stronger!!