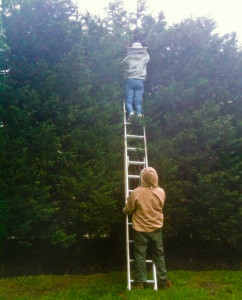 This afternoon we ended another busy week with Mary climbing a ladder to retrieve a swarm near one of our yards. Since the evenings have been  cold and damp  and the days have been getting rain  a number of hives have swarmed. Earlier in the week  at an apple orchard where we have  bees Mary found two swarms on the same apple tree. Tonight we were reminded about the hazards of retrieving swarms when we learned that a former president of the Central Jersey Beekeeping Association fell off a ladder while catching a swarm and broke his hip; he is expected to be released from the local hospital in the next two days.

On Monday we completed a second successful grafting  and those Russian queens, once hatched, should begin laying eggs by June 1st.  On Thursday we put Russian Queen cells into Summer mating Nucs from last week’s 1st grafting and they should begin laying eggs by the May 26th.  We got a big break earlier in the week when a local beekeeper announced he had extra Strachan Apiary NWC queens from a recent UPS delivery. We had been on a Strachan waiting list for the last two weeks and called them daily to see if they had any cancellations – but to no avail.  We rushed to  New Brunswick and picked up the queens and two days later released them from their wooden cages. We are so glad to be able to add Strachan NWC stock to our breeding operation.