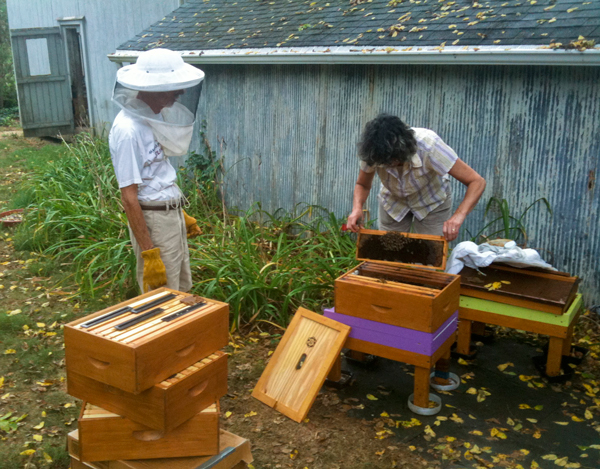 I had been contacted earlier this year, by a local gentleman who was interested in keeping bees. He asked me if he could spend some time with me while I worked my bees. After completing his time with me he ordered two Nucs from a reputable Beekeeper. After the Nucs were installed he began sending me detailed email reports of his observations – periodically I would visit him and inspect his new hives. During these earlier inspections I identified Small Hive Beetles. The beekeeper began using the Beetle Blaster.

During one of my later inspections I discovered that one of his colonies had gone queenless, and the other hive was in the process of being superseded, with a new virgin queen. I also now identified SHB larva. I made some additional suggestions about controlling the beetles, and we requeened the one hive. Some time after this visit the beekeeper combined the two hives since the supercedured queen disappeared.

In today’s inspection, one month since I last visited him, the newly introduced queen is showing no signs of laying and now we see fewer bees. We decided to take (3) honey supers off since the Small Hive Beetles have now begun to feed on the capped honey. The beekeeper will put all those frames of honey in the freezer to kill any SHB. I took about (50) bee samples and will send them to Bee Research Laboratory located at the USDA’s Beltsville Agricultural Research Center for analysis. We took the remaining frames of bees and combined them into 2 supers. We rearranged the Beetle Blasters, set up new sugar feeders and added a fresh pollen mixture for the bees. The Beekeeper will monitor his bees and we will keep in touch with him to answer any questions. It is very important that new Beekeepers have a mentor or a community of Beekeepers to talk too during their first year of beekeeping – when a brand new hive does not do well in its first year – it is so disappointing to a brand new Beekeeper!