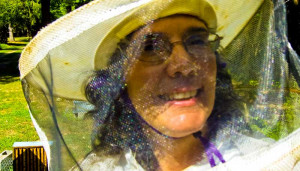 I recently sold a Carniolan Queen to a new beekeeper in Pennsylvania. She had been referred to me by another NJ beekeeper that knows us both. I am usuallyreluctant to send my valuable queens to an inexperienced home so I made sure she had a local mentor to help successfully introduce my queen.

The queen arrived via the USPS on Friday Aug 27, the most convenient day for the buyer. Her mentor recommended 4 full days caged in the queenless hive before releasing the queen. I did NOT recommend clipping the wing because I don’t believe that stops a queen from swarming. During this time, my customer emailed and telephoned numerous questions.

On Tuesday Aug 31, she called me in a panic. “The queen flew away!”  I told her – that ALMOST ALWAYS the young queen will return to where she flew from…just give her a chance to return and check in a few days and you will surely see eggs.

On Friday Sept 3, I got another very disappointed call. No eggs, and no queen.  I was crushed by this news.  How could I be wrong? I suggested she take the loss now, and I would replace this queen next spring.  “No, I want to try again NOW!” Since I was packing for a Saturday Craft Show and wouldn’t be around all day Saturday we decided she would drive out on Sunday to pick up another queen.

I didn’t have time to think about the queen situation during the craft show on Saturday.  However, in the afternoon I got a call on my cell phone but had to walk to a quiet area away from the Craft Show crowd – I was able to hear my buyer say SHE FOUND THE QUEEN!   There she was on the comb laying egg after egg, exactly like she is supposed too.

HOORAY! It reminded me of my first attempt to re-queen a colony, years ago.  I had watched with dismay as my new queen flew off the comb.  And I watched as, maybe 10 minutes later, she flew right back! Just out for one more fling, before settling down to her life’s work.