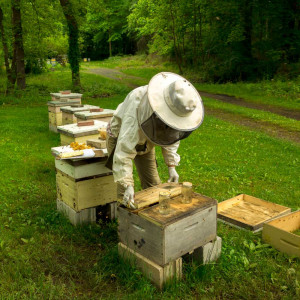 Our NJ Honeybee Project is beginning its 11th year. So far this season we received our Sue Cobey Breeder queen and we are happy to report she is in her new hive and laying. Later in June we will be adding to our breeding program four VSH daughter queens from a Dr.John Harbo breeder queen.

For the first 5 years we grew to 80 hives from our first hive and managed our colonies like most beekeepers- that means we treated our hives. In July 2002 we harvested 4,000 pounds of honey; but a month later over 40 of our hives died- they just collapsed. We were devastated! We spoke to all our Beekeeper friends and about the best they could tell us was the mites that we had been treating for, had become immune to the treatments. The conventional thinking had been to treat the mites with chemicals and when the chemicals didn’t work anymore then we should switch to the newest chemical which the mites still had not yet become immune to. Mary and I had worried a lot about treating our bees with chemical medications and this disaster was the last straw.

We immediately began to look around to see what other beekeepers were doing to fight the mites that didn’t involve chemicals! Soon we discovered a Honey Bee project that was being run at the USDA , ARS Honey Bee Breeding, Genetic, Physiology Research Laboratory in Baton Rouge, Louisiana that was actually working with Russian Queen Honey Bees imported from Russia. The purpose of the project was to determine if the Russian race of the Honey Bee species (Apis mellifera) would be more resistant to the mite (Varroa jacobsoni).

The western Honeybee, Apis mellifera, is not native to the Primorsky Territory on Russia’s Pacific coast, but was first moved there in the last century. At that time, pioneers from western Russia took advantage of the completion of the Trans-Siberian Railway and moved bees from European western Russia to the Primorsky Territory in Asian far-eastern Russia. This far-eastern area of Russia is within the natural range of the Asian Honeybee, Apis cerana, the original host of the mite, Varroa jacobsoni. Thus Apis mellifera was brought into the likely range of the mite, V. jacobsoni even before the parasite was scientifically described in 1904. This probable long association of the mite, V. jacobsoni, and the western honey bee, Apis mellifera, in the region has created one of the best opportunities in the world for the western Honeybee, Apis mellifera, to develop genetic resistance to the mite, V. jacobsoni…. (Source: USDA Agriculture Research Service)

When Mary and I discovered the American Honey Producers Association was meeting in Baton Rouge, Louisiana for their 34th Annual Convention (January, 2003) and they were going to highlight the Russian Honey Bee and also take a field trip to the USDA , ARS Honey Bee lab we booked our flight!

In the Spring of 2003 we began, in earnest, the remaking of our operation. For the first 5 years we added what we felt were true Russian stock from reputable beekeepers. At the same time we stopped all treatments on our bees-we wanted to encourage our bees to fend for themselves as we brought in new Russian stock.

In 2008 after taking 3 classes with Sue Cobey we brought in our first Carniolan breeder queen from Glenn Apiaries. We found the Carniolans to be a wonderful bee to work with. And when we began bringing in Sue Cobey’s New World Carniolan Breeder Queens in 2009 our appreciation for the NWC bees increased; they are gentle to work with and exhibit a high level of hygienic behaviour. Due to the wonderful characteristics of the NWC we ceased bringing in Russian stock and moved our operation over to New World Carniolans in 2013. In 2014 we will be bringing in another NWC breeder plus we will be placing VSH daughter queen hives near our breeding yards with the ultimate goal of continuing to improve our bees.

2004– brought in Russian queens from Bob Brachman (NY) and Ray Revis(NC). Ed completed a queen rearing course with Sue Cobey at the University of Ohio.