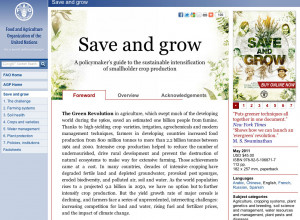 crisis and how our food supply is threatened due to bee losses from CCD. Recently I read a New York Times article, A Warming Planet Struggles to Feed Itself,  written by Justin Gillis. It  reported on the results of the Green Revolution  in the 1960’s and 70’s and how mass starvation  was probably prevented in Indian and Pakistan by Norman E. Borlaug, an American agronomist. Well now in 2011 there are many new problems facing the world’s food supply in addition to the declining honey bee population.  The Food and Agriculture Organization of the United Nations has just published a new book, Save and Grow which addresses a new paradigm of agriculture called Sustainable Crop Production Intensification (SCPI).

Here is an excerpt from their web site:

…. while the Green Revolution led to a quantum leap in food production and bolstered world food security, intensive crop production has, in many countries, depleted agriculture’s natural resource base, jeopardizing future productivity. In order to meet projected demand over the next 40 years, farmers in the developing world must double food production, a challenge made even more daunting by the combined effects of climate change and growing competition for land, water and energy.  In order to grow, agriculture must learn to save….