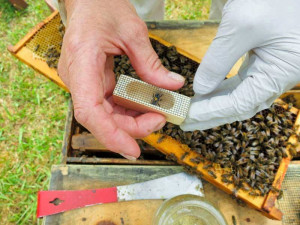 Later in May, during a raging rain storm we drove to Vermont and picked up (10) Russian nuc’s from Kirk Webster. After picking up the bees we promptly turned around and drove back to New Jersey. We arrived home at 2:00 am and went to bed; then got up at 5:00 am to move the new bees into our yard. The bees are a welcome addition to honey bee project. Article on Kirk Webster in Orion Magazine

The weather this past summer and fall made things more difficult for our bees to produce extra honey with the monthly precipitation going above and below the average norms throughout the honey season. Finally the fall started off with a very cold September, which greatly impacted our bees honey production. We are getting many reports of New Jersey beekeepers who are feeding their bees so they can make it through winter. Our fall honey crop was almost non-existent this year; we normally get over 1,000 pounds of Red Bank Raw honey during the fall.

This past year was pivotal for Mary and I. We were very successful in our 1st full season of grafting honeybee queens and we continued our program to develop a stronger honeybee without using chemicals. But during the year we had many debates about the propensity of the Russian Honeybee to swarm; something that we have observed and lived through during the past four years of our program. We compared this Russian Honeybee trait with its positive trait of being able to handle mites without the use of chemicals.

We decided to add New World Carniolan (NWC) Honeybee stock to our program for additional genetic diversity. Later in 2007 we will be adding NWC queens alongside our Russian Bees. Sue Cobey at the University of California at Davis