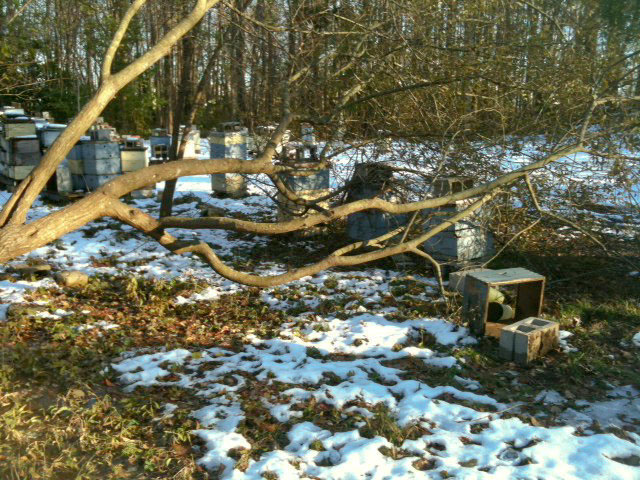 The winter may be the most challenging time for honeybees in the northern climates. This winter has already thrown more at us than most years do.   We try to prepare for typical weather events in advance by adding extra heavy blocks on tops, and solid bottoms below, plus feeding if necessary.  But falling trees are hard to predict and prevent.

The combination of Hurricane Sandy on October 29 and the Nor’easter the following week uprooted more trees than we had ever seen before. Our whole county looks like a good harvest of future firewood following these early storms. Our chainsaw was put to work cutting back limbs that lay on top and against many of our production hives. We were lucky that in all but one case, the hives themselves remained upright.

That one exception happened to our Carniolan breeder queen.  The day after the blizzard, we discovered Hive #128 upside down under a fallen locust tree. The cluster of bees was under frames in the snow.  Ed quickly set up the hive body away from the tree, and physically picked up handfuls of bees, replacing them into the hive.  There was no way to confirm the survival of any of those bees at that time, due to the intense cold temperatures.

It was a few days later that temperatures rose enough to take a closer look.  Sunshine warmed the front of Hive #128, and a few bees were seen at the entrance.   Could it be they are alive? I carefully opened up the top, and pulled one frame out at a time. Each deep frame in the top box was heavy with honey.  I removed the top box and began to inspect the bottom frames. I saw a few capped brood cells as many bees clung to each frame. I had looked at 10 frames in the top, and then worked my way across to the final frame in the bottom.  There she was on that last frame!  They have plenty of honey stored, and it appears they have enough bees to maintain the right temperature for winter survival.

It is early in the winter, and the bees have a long way to go before spring. We wish all of you a Happy New Year, and a bountiful 2013!