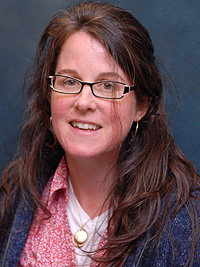 This is a reminder that Dr. Deborah Delaney, Assistant Professor Entomoloy & Wildlife Ecology will be speaking at the  February 25, 2012 New Jersey Beekeepers Association Late Winter Meeting. Dr. Delaney will be discussing her research on Feral Honeybees and Honeybee nutrition. The meeting begins at 8:30 am at the Rutgers EcoComplex, 1200 Florence-Columbus Road, Bordentown, New Jersey.

The following excerpt from a recent American Bee Journal article references her research.

….The original distribution of the honey bee included Europe, Africa and parts of Asia where as many as 28 distinct “subspecies” or geographic races are known to occur. Records indicate that, with the assistance of sailing ships, North American beekeepers established a population of one of these subspecies (A. mellifera mellifera) in Virginia by 1622. The subsequent history of beekeepers-assisted honey bee transport to North America is a fascinating topic in its own right, with most additional introductions taking place between 1859 and 1922. By 1922, when further importations were restricted by the US Honey Bee Act, seven additional subspecies had been sampled and introduced to the US, including three that found eventual favor with US beekeepers: A. m.  ligustica (Italians), A.m. carnica (Caniolans) and A.m. caucasica (Caucasians) (Sheppard 1989a,b).

As a by-product of these various introductions, a large population of feral honey bees became established in the US. Genetic studies demonstrated that this feral population contained genetic markers indicative of various honey bee subspecies that constituted historical founding populations (Schiff and Sheppard 1995, 1996), thus providing evidence that the feral population could serve as a genetic reserve for bee breeders. Unfortunately, the arrival and establishment of parasitic mites in the late 1980’s eliminated  much of the feral bee population and consequently, the potential source of usable germplasm for  breeding. There is a recent evidence that remnants of the US feral population may yet persist (Magnus and Szlansky 2005; Seeley 2007), which could restore the utility of this population to bee bredding. A further challenge to the maintenance of a broad genetic foundation for breeding results from current large-scale queen production practices, whereby each queen “mother” is typically used to produce more than a thousand daughter queens. Overall, it has been estimated that fewer than 500 queen mothers are used to produce around 900,00 daughter queens annually for commercial sale in the US (Delaney et al. 2009)………