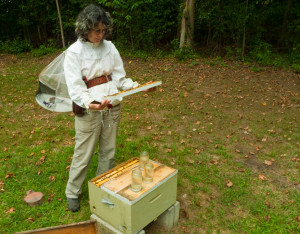 Over the last several years in New Jersey there has been an increase in the number of residents becoming hobbyist beekeepers. There are a number of reasons for this including the publics’ concern about the declining Honeybee population and the reports of Colony Collapse Disorder in the National Media. In addition to and maybe because of these reports Rutgers University has offered theBee-ginning Beekeepingcourse through the Office of Continuing Professional Education – additional courses sessions have had to be scheduled due to their popularity.

We took the Joy of Beekeeping course (that is what Rutgers called it in 1998) so we were once a “new” beekeeper.So now aftertwelve years when a new beekeeper reaches out to us for advice, we enjoy taking a look, helping them learn and perhaps help diagnose a problem.

When a new beekeeper asks for advice, I usually ask them by telephone or email, what they observe first. Their answer tells me how much knowledge or experience they have. I want to know where they got their bees, what race of bee do they have, how long they have had the colony, and when they first noticed the problem.

In visits to some of these new beekeepers’ yards, I have noticed a variety of issues, and in many cases, very healthy, productive colonies. Some problems I have seen are as follows:

1. Queenless condition – A condition that results from package bees that never accepted their queen. Depending on the amount of time lapsed since the package was introduced the bees may have reverted to drone layers.

2. Starvation – occurs when there are not enough foragers, or during a dearth. In many instances the beekeeper has not fed the queen and her brood.

3. Small Hive Beetles – a problem in weaker colonies, which have become infested with the larva.

4. American Foul Broad – If I have found a hive which I suspect has American Foulbrood, I have referred the new beekeeper to the New Jersey State Bee Inspector.